Our history in the U.K.

The Handmaids came to England from Spain in 1909.

Upper Belgrave Street: 1909 – 1937
They set up their first house in Upper Belgrave Street in 1910, when Mass was first celebrated, and remained there until 1937.
The first community consisted of 15 Sisters and 4 Novices. As not all of them spoke English, to master the language was top of their agenda.
They gave private classes in music and Spanish; started a club for working girls, and established Adoration of the Blessed Sacrament – setting up the first group of “Adorers”.
They also welcomed people from Spain who came to learn English.

Avenue Road / St. Edmunds Terrace: London 1937 – present day
In 1937 they transferred to Avenue Road, Regents Park, London where they continued their school for young children.
They opened a Residence for foreign students known as “Ancilla Domini” which was also the residence for their young Sisters in Formation. This was situated around the corner from Avenue Road in St. Edmund’s Terrace where in 1960 they built the Church and in 1961 they built a new Primary School known as St. Christina’s which is thriving to this day.
Having, eventually, to demolish the “Ancilla Domini” building, in 1980 the Sisters built a new convent in its place beside St. Christina’s School where they still live and they sold the house on Avenue Road.

A Novitiate was set up on a farm in Leahoe, Hertford.
Soon a Sunday School developed for young working girls, both Catholic and Protestant.
At the request of the young people the Sisters began giving them sewing, Spanish and French classes in the evenings and facilitated Retreats for young women.
With the passage of time the work on the farm became too much for the Sisters and there was a sharp fall-away of young people in this remote place so it was decided to transfer the Novitiate to Englefield Green.

A farmhouse in Englefield, in the Diocese of Southwark, was chosen as the place to set up a Boarding School for girls which opened in 1921.
To here the Novitiate from Hertford was transferred and Englefield became a House of Formation for the young Handmaid Sisters.
Many foreign girls were also accommodated here to learn English. 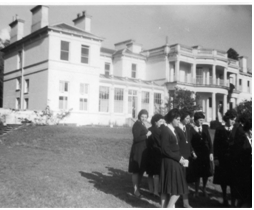 In 1955 the Convent, School and Novitiate were transferred to Marydale, Highcliffe-on-Sea, in Hampshire.

BOSCOMBE: 1970 -1980
At the request of the Bishop, in 1970, Marydale School merged with Boscombe School beside the Jesuit Church in Boscombe.
The Novitiate also moved there.
One of the sisters became Sacristan to Corpus Christ Church, owned by the Jesuits.

In 2003 the Southbourne Community moved back to Boscombe, nearer the Jesuit church.
They continued with their pastoral work and formed the ACI Family which is still going strong.

In 1929 the Sisters moved into farmland in Beckenham and in 1930 they started a school with just 12 pupils. As the numbers continued to grow they built a new, private, boarding and day school which opened in 1936. This school catered for children between 4 and 18 years of age.

Then in 1963 they built St. Mary’s, a non fee paying , State Aided, Primary School on the convent grounds. The first Lay Head was appointed in 1984.
It continues to flourish and is, today, the power house of catholic families in the area.

In 1987 the Boarding and Secondary School was closed and a new community of 5 Sisters was formed in Village Way, near the Parish church and became engaged in pastoral work in two parishes.
After discernment about our mission in the planning process for the new Atlantic Europe Province, the Handmaids decided to leave Beckenham in 2016, leaving behind more than 80 years of dedication and service to the people of Beckenham.

In 1973 a foundation was made in Rotherham with Sisters doing pastoral and school work which they engaged in for 11 years.

In 1987 the Glasgow foundation was made.
The Sisters lived in tenement flats working in the parish and local community schools.
They worked there for 13 years.

To date the Handmaids in the UK continue to minister in London and Bournemouth.
To know more about these communities see: “who we are”.