On a mission… in Bazartete – East Timor

Hello! From Timor… more precisely, from Bazartete, an area in the mountains 23 km away from Dili – 1h30 travelling time! – I will tell you a bit of what, nowadays, myself and three other sisters who live here, are doing.

For the first time this year, we are in charge of coordination in the school. We wanted to give a hand because most of our pre-school children go there and we realised that most of the work done by us with them was being lost, for lack of follow-up…

At this school, there are two of us: myself – a Portuguese and the coordinator-, and Sister Kumy – a Japanese, who is helping children with special needs.

Since our arrival at the school we have already done some renovation and introduced several new activities with the students such as: on the Feast of Saint João de Brito, patron of the school, we had sports activities and we also had a farming project with the support from Proacis Foundation.

There are 62 children and everything is going fine! Since we began, 10 years ago, we have provided a great deal of training for teachers and now the fruits are becoming visible!

We are part of a network of pre-schools, providing mutual support for one another to continue with the training which is needed very much.

We have another kindergarten in a village 1h30 away from Bazartete, with 34 children. 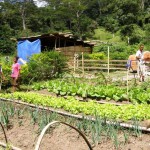 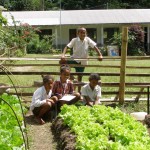 This year, in Bazartete, we have two Proacis projects: a farming project called little farmers for students from the 5th and 6th grade, and a sports project for 12 to 17 year old girls, with three groups: athletics, volleyball and basketball. In the beginning of July, we organised the first tournament with teams from Dili and Bazartete. It was a very lively event!

4. Group of girls in vocational discernment:

Also with us are the pre- postulants who spend a year here, having spent another year as candidates.

Usually, in Timor, the girls who believe they are called to Religious Life ask to be admitted after completing high school.

However, the process of vocational discernment is slow: after the Candidacy, in Dili, and the Pre-Postulancy, here in Bazartete, they continue their formation of Postulancy, Novitiate, and also the Juniorate, sometimes in the Philippines, together with young Vietnamese and Philippine girls. 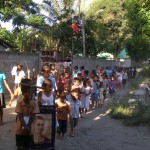 5. Pastoral work in the villages: altar servers and children and youth groups:

Part of our work means responding to the pastoral needs which arise. These include Celebrations of the Word of God in villages where there are no priests, formation of altar servers, animation of children and youth groups, retreats and preparation for the Sacraments. This we do in response to the needs in Bazartete and other villages in the region. Sometimes, when asked, we organise retreats for other groups, and also for anyone wishing to make a retreat in Bazartete.